PETALING JAYA: Parti Pribumi Bersatu Malaysia, Umno and PAS need to stick together as they face the 15th General Election and beyond, adding that there are some out to split the Malay vote, says Wan Saiful Wan Jan (pic).

The Bersatu information chief said political stability was important to rebuild the country's economy, adding that it was crucial to stand united as the political rivals were eyeing the chance to get back on top.

"We know that DAP and Pakatan Harapan are looking forward to a split in Malay votes so that they can return as the government so the call for a political consensus between Perikatan needs to be heard seriously and sincerely," he said in a Facebook post on Tuesday (March 9).

Wan Saiful also warned party members that anyone who wanted to weaken Perikatan was likely linked to the Opposition.

"They want to see a new alignment that could further weaken us," he said.

He was commenting on a call made by PAS deputy president Datuk Seri Tuan Ibrahim Tuan Man for the three large Malay-dominated parties to stand united for GE15 and beyond.

The Kubang Kerian MP said the three parties must uphold the current government and focus on resolving issues affecting the people brought on by the Covid-19 pandemic.

Tuan Ibrahim's comment comes almost a week after Umno announced that it would not face the GE15 with Bersatu but will maintain ties with Perikatan until Parliament is dissolved.

Wan Saiful said he agreed with Tuan Ibrahim's views and drew similarities to an organisation or a family unit.

"When we are a family, we shouldn't bring up views that could hurt other family members. Instead, we need to protect the family spirit and not destroy it for one's own personal agenda.

"In these challenging times, the people want us to focus on welfare and economic revival. Don't be the agent that ruins the country's political stability," he said. 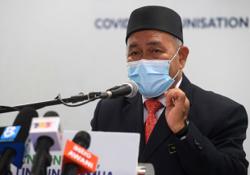