KLANG: A vessel which docked illegally some seven nautical miles off Pulau Pintu Gedong has been detained by the Malaysian Maritime Enforcement Agency (MMEA).

“The tanker was registered in Hong Kong and has 21 crewmen, including the captain.

“The crewmen were China and Bangladesh nationals with valid documents,” he said in a statement yesterday.

The tanker’s captain also failed to show any docking permits.

“The last port of embarkation was in Dumai, Indonesia, and it was heading to Port Klang.

“The tanker’s captain is believed to have committed an offence under Section 49B(1)(l) of the Merchant Ship Ordinance 1952.

“Two crewmen were also detained for further investigation,” he added.

Capt Rosli said the operation was a success through the cooperation between MMEA and the Marine Department.

“All shipowners and agents have been reminded to follow regulations but some are still stubborn.

“Those who intend to dock their ships in Malaysian waters must get permission from the Maritime Department and follow the regulations before conducting any activity,” he said.

Capt Rosli urged those who have information on any maritime-related crime and emergency to contact Selangor MMEA operations centre at 03-3176 0627 or MERS 999. 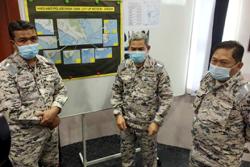