Cities getting a lot hotter

PETALING JAYA: Malaysian cities have gotten significantly hotter over the past few decades, a study on land surface temperatures has shown.

Think City’s Dr Ceelia Leong said while comparisons of temperatures within each city were carried out across different time frames, and each terrain held unique geographical characteristics that influenced the temperature, a consistent increase across all five locations was observed.

The rise in temperature in urban areas had been linked primarily to the urban heat island effect, a lack of greenery and global warming, said the geospatial analyst.

The urban heat island effect occurs when a city experiences much warmer temperatures than surrounding rural areas, with the difference in temperature between urban and less-developed areas related to how much solar radiation the surfaces in each environment absorb and how much they retain heat.

Johor Baru registered a 6.70°C change in temperature within 13 years, George Town 6.37°C within a 32-year period, while Bayan Lepas registered a 5.63°C change within 32 years.

Surprisingly, Malaysia’s capital and most developed city Kuala Lumpur (KL) only recorded a 1.64°C increase between December 1989 and October 2019.

“Compared to other Malaysian cities, the KL city centre has been able to demonstrate the efficiency of its domestic gardens, parks and woodlands, ” said the study, which used satellite imagery to map the extent of the heat island effect in the cities and to observe changes over the past few decades.

The increase of temperature in Ipoh was attributed to its ecological change and urban trends while Johor Baru’s was attributed to rapid gentrification, as well as increased economic corridors and number of industries.

George Town’s temperature increase was attributed to the immense traction in popularity in businesses and hospitality services while Bayan Lepas experienced a rise in temperatures because of the growth in industries and urbanisation.

Leong said the urban heat island effect is caused by the types of materials used in cities such as concrete and bitumen, which absorb and re-emit the sun’s heat more than natural landscapes.

“Two characteristics were clearly evident. Firstly, Malaysian cities are getting hotter due to the increasing intensity of development, which is compounded by the effects of climate change.

“Secondly, the maps showed that urban greening had beneficial impacts, with the ability to lower urban temperatures between two and eight degrees Celsius, ” she said.

Think City managing director Hamdan Abdul Majeed said the battle against climate change requires a concerted effort from both the public and private sectors, as well as the community at large.

“As we are in the decade of action to take concerted steps towards achieving sustainable development goals, adapting to the impacts of climate change does not fall solely onto the shoulders of Malaysia’s policymakers.

“Rather, it will require all hands on deck, from the government and the private sector to the general public, ” he added. 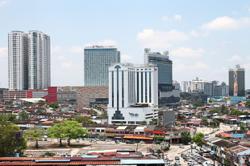