The Defence Minister said if the current downward trend continues, it is possible for interstate travel to be allowed, with risk assessment from the Health Ministry (MOH), and people can return to their hometowns and villages to celebrate Hari Raya this year.

"Last year, on the advice of MOH, we did not return to celebrate Hari Raya. I am also from a village and it is a must to return to the village, it has become a routine. When I could not do it, I was disappointed.

"However, with the declining cases and R0, which has also dropped to 0.88 thus far, the MOH will evaluate. Let's pray that we can ‘balik kampung’ this hari Raya, ” he said when appearing as a guest on the "Ruang Bicara" programme produced by Bernama TV here Thursday (March 4) night.

This year's Hair Raya Aidilfitri is expected to fall on May 13.

Ismail Sabri stressed that the decision to open state borders should be considered carefully because when interstate travel was allowed previously, cases due to clusters of those returning to villages increased.

Meanwhile, Ismail Sabri said from Thursday night, there will be no more roadblocks at district borders as interdistrict movement has been allowed from Friday (March 5), while those at state borders will be maintained.

Commenting on recreational and public parks, which have not yet opened in some states although the government has allowed them to operate, he said that there should be no issue on the matter as the government had decided the parks could be opened.

"Parks for recreational purposes, including theme parks, have been allowed to resume operations because these parks are open places, they are less risky than indoor areas.

"The public can refer to the local authority on SOPs for parks reopening in their areas, or refer to the National Security Council (NSC), ” he said. - Bernama 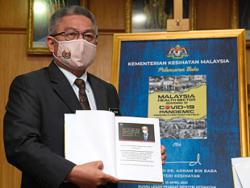