ISKANDAR PUTERI: Police have arrested three teenagers for allegedly splashing red paint on the main gate of a house in Taman Nusa Indah, near here.

Iskandar Puteri OCPD Asst Comm Dzulkhairi Mukhtar said the victim, a 42-year-old unemployed woman, was at the house when the three male suspects aged between 17 and 18 approached her at about 10pm on Tuesday (March 2).

“The suspects then splashed red paint on the house compound and some landed on the victim’s Proton Exora.

"Before leaving the place, the suspects left a note 'Today Paint Tomorrow Fire!'" he added.

ACP Dzulkhairi said the suspects were detained by the security guards of the gated housing estate.

He said they were handed over to policemen who also seized a car and two plastic bags containing red paint.

ACP Dzulkhairi said two of the three suspects worked as a barber and a cook while the third teenager was unemployed.

He said an initial investigation showed that each of them had a criminal record and tested negative for drugs.

The suspects, he added, were brought to court to obtain a remand order and the case is being investigated under Section 427 of the Penal Code for mischief. 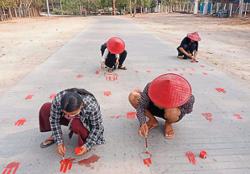