The syndicate had rented the three-storey bungalow house inside a gated housing area to avoid police detection.

"We arrested 31 individuals aged in their 20s in the house.

"Initial investigations revealed that the suspects were operating an online gambling call centre, and were also part of an online bogus auction syndicate," he said when met at the scene.

He added those arrested have been brought to the Selangor police headquarters for further action.

"The syndicate was found to be renting the house. We will call up the owner to facilitate our investigations," he said, urging the public not rent out their properties to those carrying out illegal activities.

He said anyone who was suspicious that their tenants were involved in illegal activities should alert the police.

"The syndicate members were paid as much as RM3,000 monthly.

"They are believed to have raked in RM2mil in profits from their illicit activities," he said, adding that the case has been classified as cheating under Section 420 of the Penal Code. 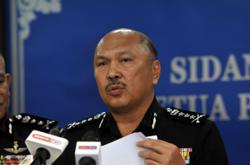