The decision on interstate travel is expected to be announced on March 2 while manicure and pedicure operators can expect a decision tomorrow.

“Two days before the order ends, I will announce the decision of the NSC special meeting, ” he said in a media briefing.

The senior minister was asked if the government would allow interstate movement for conditional MCO states which showed signs of recovery with low numbers of Covid-19 cases recorded.

Perlis is the sole state under recovery MCO, while Sarawak is under the conditional MCO until March 1.

Four other states – Penang, Selangor, Kuala Lumpur and Johor – are under MCO.

On another matter, Ismail Sabri defended certain government actions that were seen as “flip-flopping”.

Explaining why changes were made to a certain standard operating procedure, he said, amendments were made to suit the current situation and needs.

“During MCO 1.0, we only allowed essential and critical businesses to operate. For the current MCO, we changed the approach so that more businesses can continue to operate. This is necessary so that income and livelihoods are not affected, ” he explained.

The senior minister also clarified the confusion on inter-district travel restrictions, saying that district administrative borders and not the one as per police jurisdiction are being used to determine its limitations.

This came following complaints from the public they were stopped and compounded by police at roadblocks set up within a district when the government lifted the 10km radius travel restrictions.

Ismail Sabri said those who had been issued with compounds in such cases can appeal to the Health Ministry through district health offices where the compounds were issued, adding that while the maximum compound is RM1,000, offenders can appeal and health officers can use their discretion to lower the fine.

On mandatory screening of foreign workers, a total of 1.05 million workers had been screened for Covid-19 as of Feb 15. 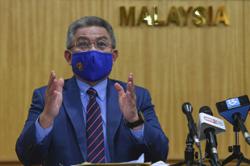