GEORGE TOWN: The hot weather currently being experienced in the country, may reduce the survivability of the SARS-Cov-2 virus but will not kill it, says Universiti Sains Malaysia virologist Prof Dr Yahya Mat Arip.

He said the virus would remain contagious despite the hot spell that is expected to last until mid-April.

“The hot weather might reduce virus survivability outside of the host because SARS-CoV-2, the virus responsible for the Covid-19 outbreak, is an enveloped virus.

“But that is not a guarantee it will totally destroy the virus or hamper it from infecting others.

Dr Yahya said although the hot weather could lead to reduction in outings and interactions among people, they should also consider avoiding crowding indoors.

“With the hot weather, people tend to go out less, reducing movement and physical interaction.

“But another concern rises when people gather indoors or in air-conditioned rooms, which leads to a higher tendency of transmission if any of them are infected, ” he said.

According to the Malaysian Meteorological Department, the country is experiencing the end-phase of the northeast monsoon.

Its director-general Jailan Simon said during the period, the amount of rainfall would be low throughout Peninsular Malaysia, especially the northern states.

“The hot spell this year will not be extraordinary and the current weather is a natural phenomenon throughout February to April every year. So far, the highest temperature recorded in February is 36.2°C, which is lower than last year’s 37.4°C in Kuala Kangsar.

“The hot spell is expected to ease by mid-April, ” he said.

The hot weather however is a blessing to coconut sellers as demand for fresh coconuts has almost doubled.

Coconut seller Joel Jeyachandran, 36, said he had been selling about 500 coconuts a day since the hot spell started.

“Due to the movement control order, all my customers are now locals and they prefer takeaway instead of drinking it at my stall, ” he said. 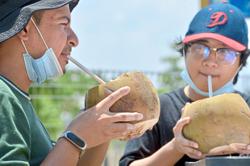 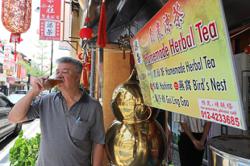