He said if this was really happening among the students, the government should take stern action against those involved, especially the "Sugarbook" operators.

"This is something that is very sad for us. The application should be prevented from being used in our country as it encourages people to do things that are not right and violate the laws including syariah law.”

He told this to reporters when asked to comment on the issue after presenting the Musa'adah Covid-19 fund contributions to more than 80 taxi drivers at Sultan Ismail Petra Airport in Pengkalan Chepa here Sunday (Feb 14).

Sugarbook claims that an increasing number of public and private university students in this country have been using its app to look for sugar daddies to earn easy money in solving their financial problems, especially during this trying Covid-19 pandemic.

Sugarbook is also said to be the biggest sugar daddy-sugar baby dating service in Asia.

Marzuk said his department would leave the matter to be investigated by the Ministry of Higher Education and the Malaysian Communications and Multimedia Commission (MCMC) for further action to be taken.

He also said that based on records, there has been an increase of over 40% in the registration of new users of the application due to financial pressure arising from the Covid-19 situation. - Bernama 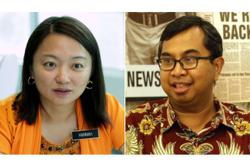