He said the decision was based on the advice of Prime Minister Tan Sri Muhyiddin Yassin for EPF to improve the initiative after taking into consideration public feedback.

“This in turn will assist members, to tide them through the ongoing challenges of the Covid-19 pandemic, ” he said in a statement yesterday.

The Star in its frontpage story on Wednesday revealed that eligibility criteria for the i-Sinar facility were to be relaxed to give more EPF members the option of withdrawing money from Account 1 to meet living needs.

Sources said the current withdrawal eligibility criteria of a 30% drop in income was quite limited in view of the existing movement control order and its effect on the economy and the general public.

Meanwhile, Zafrul said the removal of such conditions would allow EPF members under the age of 55 to withdraw from their Account 1, subject to their existing balance.

“For members who have already applied for i-Sinar under the current criteria, their applications will be automatically approved in due course, ” he added.

He, however, said the amounts that can be withdrawn from Account 1 as well as the maximum six-month payment schedule of the amounts withdrawn will remain under these two conditions:

“The payments will be staggered over a period of six months with the first payment amount going up to RM5,000, ” he said.

“However, the maximum total amount allowed to be advanced is RM60,000, ” he said.

The Finance Minister added that the payments will also be staggered over a period of six months with the first payment amount of up to RM10,000.

“Due to system and internal process changes required for i-Sinar Online, it will take the EPF some time to implement these latest updates.

“The fund will announce further details soon and the government appreciates members’ patience and understanding while these changes are being made, ” he said.

Zafrul said members are also advised to refer to information from EPF’s official communication channels and be mindful of misleading information aimed at confusing or defrauding contributors. 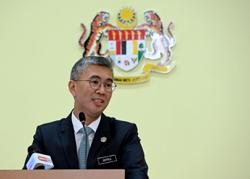