Consult us before coming up with SOPs, ask industry leaders

PETALING JAYA: Industry leaders are urging the government to let then have a say before standard operating procedures (SOPs) for businesses are drawn up.

They claim that the current situation for the ongoing MCO had issues and created confusion about carrying out economic activities.

In a virtual media conference on Saturday (Jan 30), Industries Unite MCO 2.0 group coordinator Datuk Irwin Cheong said the group came to a general consensus that they want engagement with the authorities.

According to them, the government's instructions with regard to mid-stream and down-stream businesses were not clear.

Industries Unite MCO 2.0 is a loose group of SMEs from various industries.

SME Association of Malaysia president Datuk Michael Kang said the government must stop working in silos if it wants the economy to recover and contain the pandemic in certain sectors.

"Engage with us SMEs, not work in silos. In the MCO last March, 50% of tourist and retail businesses closed down.

"The other 50% retrenched staff and now most are working with skeletal staff," said Kang.

He also said not everything had to be handled by the Health Ministry as they would not know how businesses work.

"During the recovery MCO, 50% to 60% businesses managed to return. However, in the second MCO this time, business dropped a great deal.

"What we want is for the government to engage us prior to the SOP is released. For example, optical businesses were not allowed to open initially but after complaints, they were allowed to," said Tay.

She also said some shops, which had permission to operate during the MCO, were told to close.

"We retailers have at least 200,000 jobs. Please engage us before deciding on the SOP," said Tay.

"The Health Ministry confirmed 30% of the clusters were from the manufacturing sector, so do not punish the whole nation (with an MCO) because of a few sectors," said Wong.

Malaysian Hair Association honorary president Datin Winnie Loo lamented that it was not fair to allow night markets to opened and hair salons – which had not contributed to any clusters – are forced to shut down.

"Hair care should be an essential need and but we were not allowed to open. In the five months we were allowed to operate under the recovery MCO, we did not create any clusters as we diligently wore personal protective equipment and were very careful," said the renowned hairstylist.

Footwear entrepreneur Datuk Lewre Lew Fong Voon, representing the Brand Association of Malaysia, said more SMEs would definitely be shuttering this MCO if the government does not make an effort to engage them.

Malaysia Entrepreneurs' Development Association Datuk Tony Looi said that the SMEs were "half-dying" in the first MCO but in this second MCO,"there will be more SME deaths".

"We understand that a lockdown is necessary, but the SOPs for businesses are not detailed enough," claimed Looi.

In a statement, the group said that the economy was like a "valuable patient in ICU " and required careful and dedicated attention.

"We would like access to data from MySejahtera contact tracing monitoring, as this could assist in possible partial lockdown looking at clusters from specific sectors, allowing the easing of MCO on lower risk sectors.

"We also request for tighter implementation and monitoring of SOP in every sector of business and staff testing where possible," said Industries Unite MCO 2.0.

The group also requested that the government assist business owners (especially the small and micro businesses) on possible subsidies, zero or no interest loans and moratorium on existing financial commitments for at least six months from banks and financial institutions.

"We need to keep businesses and supply chains going.

"The recent shortage of bread is a good example of how this situation can turn chronic if we don't pay attention to businesses and the supply chain. It's a total ecosystem," said the group.

The list of participating bodies under the Industries Unite MCO 2.0 are: 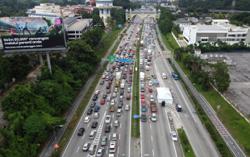