IPOH: A 44-year-old scrap metal recycler has been slapped with three charges at the Magistrate's Court here with causing a commotion at the Lahat police station.

Arnee Ahamad Pazir, from Tanjung Tualang, was charged under Section 90 of the Police Act for causing a ruckus at the police station at about 11.40am on Jan 24.

He was also charged under Section 427 and 324 of the Penal Code with damaging a glass door and voluntarily causing hurt to a policeman with a helmet respectively at the police station.

He claimed trial after being read all the charges before court judge Nur Melati Diana Abd Wahab on Wednesday (Jan 27).

“He had gone to an eatery earlier, but was told to follow the standard operating procedure if he wanted to dine in.

“Dissatisfied, he went to the police station to get an explanation, ” he told the court.

“A policeman then reprimanded him and a scuffle broke out.

“As he fell down, his helmet hit the policeman and also hit the glass door, ” he added.

Nur Melati Diana set bail at RM4,000 with one surety and Feb 10 for submission of documents. 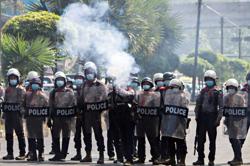