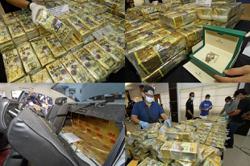 GEORGE TOWN: Two men who were making their way to Penang from Langkawi in a boat were caught with RM472,500 worth of syabu.

"The narcotics department team found the unnumbered boat suspected to have been used to traffic drugs.

"Two men, a 52-year-old Malaysian and 36-year-old Thai national, were arrested after the drugs were found on the boat.

"They were transporting the drugs from Langkawi to Penang to be handed over to a supplier.

"The 10.5kg of syabu worth RM472,500 could have been used by 50,000 addicts," he said at a press conference at the George Town district police headquarters in Patani Road on Tuesday (Jan 19).

ACP Soffian said the drugs, found in 10 packages of Chinese tea were covered with black tape and filled with crystal-like pieces believed to be syabu.

"Both the men tested positive for methamphetamine. They do not have prior criminal records.

"They have been remanded for five days ending Jan 22 under Section 117 of the Criminal Procedure Code.

"The case is being investigated under Section 39B of the Dangerous Drugs Act, which carries the mandatory death sentence upon conviction," he said.