JOHOR BARU: The number of flood victims in the temporary relief centres in Johor remains at 93 individuals from 23 families.

State health and environment committee chairman R. Vidyananthan said that as of 4pm on Saturday (Jan 16), there has been no changes in the number of evacuees from the two remaining temporary relief centres in Segamat and Batu Pahat.

“The number of victims in Segamat remains at 76 from 20 families while Batu Pahat has 17 victims from three families in the temporary relief centre,” he said in a statement here on Saturday (Jan 16).

The number of flood victims in the state has remained unchanged since about noon on Friday (Jan 15) after flood victims from Kota Tinggi, Kluang and Johor Baru, which were previously affected, were allowed to go home.

Vidyananthan noted that no new roads have also been affected by the floods and that only the Jalan Kota Tinggi - Kluang road in Kluang is still closed due to the flood as of 4pm on Saturday. 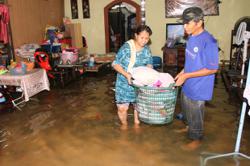