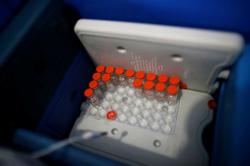 Volunteers helping to pack up cubicles at the Taman Malihah flood relief centre, which also became flooded at about 2am Thursday (Jan 14). The evacuees were moved to another relief centre nearby. — ZULAZHAR SHEBLEE/The Star

KUCHING: Some 1,826 people have been evacuated in Sarawak after heavy rain coinciding with the king tide flooding low-lying areas in Kuching, Bau, Samarahan, Serian and Miri.

In Serian, 452 people have been evacuated to six centres, while two centres each have been opened in Samarahan and Miri for 95 and 29 victims respectively.

He also advised those in double-storey homes to move to the upper floor instead of an evacuation centre, if it was safe to do so.

"I told my people in Batu Kawa, this is not going to be an ordinary flood evacuation but evacuation with Covid-19 around.

"Minimise people staying close together in evacuation centres. Told them those with two-storey house, if only the ground floor is flooded and it is safe, opt to stay in the house," Dr Sim said in a Facebook post.

He said they could still register as flood victims to receive assistance from the government.