Almost 2,000 return to homes as floods recede down south 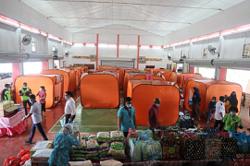 JOHOR BARU: More than 1,800 people in temporary relief centres in Johor have been allowed to return home as the flood situation in the state continues to improve.

State health and environment committee chairman R. Vidyananthan said that as of 4pm on Thursday (Jan 14), the number of people in temporary relief centres statewide has dropped to 892 from 2,752 previously.

"We have shut down 17 more temporary relief centres as of 4pm and there are currently only 10 such centres that are still open in the five affected districts.

"Kota Tinggi remains as the district with the highest number of victims with a total of 612 individuals from 165 families in the five remaining centres.

He added that only the Jalan Kota Tinggi - Kluang in Kluang is still closed due to the flood as of 4pm on Thursday while other roads that were previously closed have now been opened.