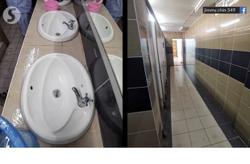 Patients unclogging the sink at the bathroom of the Likas Covid-19 low risk quarantine centre in Kota Kinabalu on Jan 9 in facebook posting on Jan 9.

KOTA KINABALU: Tired of poor sanitary conditions of the bathrooms and toilets, four patients at the Likas Covid-19 low-risk quarantine centre here took matters into their own hands and decided to clean the facilities themselves.

One of them also posted their clean-up efforts on Facebook on Jan 9 while complaining about the conditions at the centre in the Likas sports complex.

Three days after his viral post, health officials moved in to clean up the bathrooms and toilets.

In another Facebook post on Tuesday (Jan 12), the man thanked the Health Department for cleaning up the place and hoped that they would keep it up.

In his Jan 9 post in Mandarin, the man said that some of the sinks were clogged and dirty while the rubbish was not collected after he was admitted to the centre three days prior.

He and a couple of friends decided to clean it up themselves and two other patients under observation joined in to clean up the bathroom.

"I understand the frontliners are busy... It is ok, if you all don't do it, we do it," he had said in the post.

It is not the first time patients admitted to the centre complained about the poor sanitary conditions at the centre's bathroom and toilets.

Several other patients previously have highlighted the unhygienic conditions and the lack of cleaning up through posts on Facebook.

Sabah Health Department director Datuk Dr Christina Rundi had previously addressed the issue and assured that the matter would be resolved.