The international conservation group added that the move is also in line with Sustainable Development Goals and the Paris Agreement, and congratulated the government for coming up with the Green Malaysia campaign.

"Above all, it is a positive sign that we are now putting nature first – nurturing and protecting it so that it may in turn nurture and protect us," said WWF Malaysia Sabah conservation head Dr Robecca Jumin on Friday (Jan 8).

She was commenting on Prime Minister Tan Sri Muhyiddin Yassin planting a Merbau tree in the Seri Perdana grounds to mark the launch of the 100mil Tree Planting Campaign 2020-2025.

Sabah Chief Minister Datuk Seri Hajiji Noor also boosted the efforts on the same day when he planted a tree and announced a target of the planting of 36 million trees in Sabah.

She said this was seen in the restoration of Sabah's Bukit Piton, which WWF-Malaysia attests as the poster child of forest restoration.

Jumin said Bukit Piton was a reminder that this harmonious co-existence between the people and the planet is indeed possible and that "we hope that more such initiatives will be introduced by the government to make this world a better place for all species to thrive in."

Bukit Piton Forest Reserve in Sabah's Ulu Segama area was badly affected by logging as well as droughts and fires since 1983 up to1997 that threatened the survival of some 300 orang utans becoming isolated from expanses of oil palm plantations.

In 2007, WWF-Malaysia together with the Sabah Forestry Department (SFD) spearheaded the forest restoration programme in the area after the state converted it into a first class forest reserve.

"To support the orangutan’s feeding habits, fruit trees which form part of the orangutans’ diet such as Sengkuang (Dracontomelon dao), Terap (Arthocarpus sp) and figs (Ficus sp) were also planted, besides Dipterocarps which were planted in shaded areas," she said.

Jumin added that planting of 300,000 trees covering 2,400ha was completed in Nov 2019 and said that the trees are now seen to thrive in the area, growing and maturing at its expected pace and said that wildlife including orangutans are beginning to benefit.

"Individual orangutans were seen eating on trees that had begun to fruit. The presence of orangutan babies was also found in the area, a sure sign that the orangutans were eventually recognising Bukit Piton as the home that they once lost that is now revived," she added.

"The responsibility to restore nature is one that we all shoulder equally – the government, private sectors and citizens alike can do their part.

"Efforts taken by companies like (state owned) Sabah Softwoods Berhad who have factored nature into their business model, which has benefitted both their company as well as the forest and its wildlife should be emulated," she said. 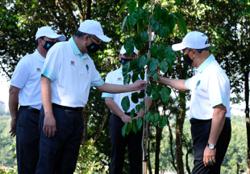