By the book: Passengers disembarking from the Rambungan ferry in compliance with SOP. — ZULAZHAR SHEBLEE/The Star

KUCHING: The enforcement of safety regulations at ferry crossing points in Sarawak has been welcomed by commuters following the Triso ferry tragedy which claimed nine lives on New Year’s Day.

At the Rambungan ferry point in the

Lundu district, 36km from here, motorist Shukri Keram said it was safer for passengers to get out from their vehicles and board the ferry on foot, as regulated.

“I think it is high time for us to observe the necessary safety measures at ferry crossing points.

“Safety should be the priority in order to prevent any more untoward incidents, ” he said yesterday.

He added that ferry users had been lax in complying with the regulations until a tragedy occurred.

“The regulations are there, it’s just that we have not been putting them into practice. It is only when an incident like this happens that we realise we should be complying with them, ” he said.

According to the SOP, all car occupants except the driver must get out of the vehicle before it is driven onto the ferry and only get back in after the vehicle exits the ferry.

Masing also said guardrails would be installed at ferry crossing points to prevent a recurrence of the Triso tragedy, which saw nine people, including a four-month-old baby, killed when their vehicle plunged into the Batang Lupar River.

Noodle seller Syed Mutakim Wan Soleh, who uses the Rambungan ferry daily to go to Lundu where he works, felt nervous about boarding the ferry after the Triso incident.

“I think the SOP for passengers to get down from the vehicle is safer, ” he said.

However, serviceman Azizi Razif, who was bringing his family to Lundu for a holiday, said he was concerned about his young children boarding the ferry on foot as guardrails had yet to be installed along the ramp.

“I’m aware of the SOP but my children are afraid to walk on the ramp, ” he said, adding that this was his first time using the Rambungan ferry. 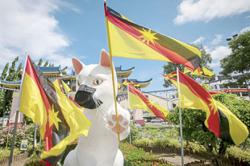 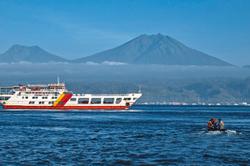