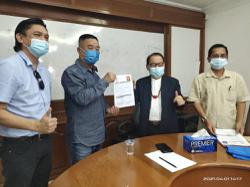 PBS president Datuk Seri Dr Maximus Ongkili, in announcing the party revamp Monday (Jan 4), said Jahid, who is the incumbent secretary-general, will be one of the three party deputy presidents representing Muslim bumiputra.

The deputy president post for Muslim quota was left vacant after its incumbent Datuk Jamilah Sulaiman quit the party in February 2020.

Both Jahid and Bangkuai emerged as key PBS leaders who were seen playing a crucial role with partners in the Gabungan Rakyat Sabah (GRS) that won the Sept 26 state election.

With the appointment of Jahid as the party’s number two, Ongkili said it will not only strengthen the Muslim arm of the party, but also ensures the existing support from the bumiputra Muslims towards PBS will continue to increase.

“This is also to prove that we in PBS have been listening to the demands from all supporters of all ethnicities for a renewal of leadership from the younger generation, ” he said.

Bangkuai, who is state assistant Tourism, Culture and Environment Minister, replaces Jahid as secretary-general of PBS, a coalition partner of the new GRS.

Bangkuai's position as the party's information chief will be taken over by current assistant secretary-general Datuk Julita Majungki.

Describing the move to rejuvenate the party’s leadership, Dr Maximus said the new appointees were "proven youthful leaders" who have been loyal and contributed towards the party’s growth.

“Ongkili added that PBS had always boasted as the oldest multiracial political party, which had also been the thrust of PBS since its inception in 1985.

“As a multiracial political party, PBS had been championing its trust and core struggle, which among others to uphold the rights of Sabah and Sabahans as enshrined in the Malaysia Agreement 1963 (MA63), fighting against the persistence presence of illegal immigrants, and our stand and support for the anti-hop law.

“We are grateful to the voters for their continued support of PBS, and as a result, we won seven seats in the last state election. It was also a test to us because, after 16 years, this was the first time PBS used its own party symbol, ” he added.