Annuar Musa defends 'No DAP, No Anwar' stance, says willing to be sacked from Umno He said he wants Umno to remain a party that champions Malay and Muslim solidarity.

Annuar also said he was willing to be sacked (from Umno) if there are those who are unhappy with his stance.

"I will defend the Supreme Council’s 'No DAP, No Anwar' (stand). If they want to sack me, then, by all means, go ahead... if they want to back those who support (cooperation with) DAP and Anwar, then please proceed as well," he said in a Facebook post Sunday (Jan 3).

Recently, the Pasir Puteh Umno division called for Annuar to be sacked from the party after claiming that he was not respecting the party president besides having also pre-empted party decisions.

Annuar, who is also Federal Territories Minister, said throughout his 40-year involvement in Umno, including attending the annual divisional meetings, the party would always have Malay and Islam matters as well as the people’s concerns as part of its discussions.

"But we have not heard these issues (being raised) this year. What we hear are calls to reject Malay solidarity and verbal attacks among one another. DAP can afford to smile now, ” he said.

Annuar also claimed that UMNO’s divisional and parliamentary strongholds in Kelantan were gradually falling into rival parties’ hands, and hoped this would not also be the case at national level. - Bernama 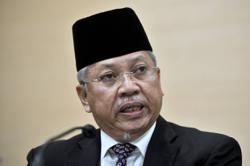