Family of five living in fear of loan sharks

PASIR GUDANG: A family of five, including two children, are living in fear after their house was splashed with red paint by loan sharks here.

Clerk Loh Hooi Li said that she started receiving calls from several unknown numbers, including numbers from Singapore, a few days before the red paint was thrown at her house on Dec 16.

“My sister who is working in Singapore wanted to borrow money from a licensed moneylender in Singapore to pay for the deposit to buy a car.

“She had reached out to two moneylending companies she found online that claimed to be licensed in Singapore to enquire about the loans. However, she later decided to back out as she felt something was not right about the companies, ” she said.

She added that her sister had told the moneylending companies that she decided not to take the loans but at that point, she had already given them her details.

“One of the companies insisted that she take the loan and then transferred S$200 (RM608.56) into her account without her consent.”

A few days later, a man by the name of Lucas deposited S$380 (RM1,156.27) into her bank account without asking my sister first, ” she said at her house in Seri Alam where a press conference organised by the Pasir Gudang MCA complaints bureau was held.

Loh said that her sister had been receiving threats from the Ah Long since.

“My sister made a police report in Singapore, closed her bank account and blocked their numbers.”

She said that she lodged a police report as she was worried about her family’s safety.

“We had no choice but to move out for our own safety, ” said Loh. 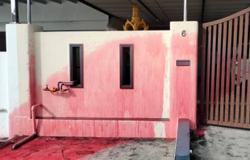