So realistic: A scene from ‘The Mandalorian’ showcasing actor Pedro Pascal as Din Djarin (right) with the Child. – Handout

PETALING JAYA: More than 100 Malaysian talents were responsible for some of the visual effect shots seen in the hit Disney+ series The Mandalorian and the 2019 sci-fi blockbuster, Star Wars: Episode IX – The Rise Of Skywalker.

In September, The Mandalorian – which falls under the vast Star Wars universe – won for Outstanding Special Visual Effects at the Emmy Awards.

This was revealed by Sailash Kumar, the general manager of Base Digital Production Sdn Bhd, at a virtual conference.

“The fun bit of working on The Mandalorian is of course getting to work on iconic shots that end up trending on social media as memes; we are proud of this fact. Getting to see the final product on the big screen compared to our computer screens is always fun too.

“Any challenges that we face are usually more than welcomed. It could be technical or creative challenges in trying to achieve the director’s vision.

“But it’s really just about achieving the highest quality for this production, and within the time frame that we are given. When you aim for better quality, you get to expand your creativity and technical skills, ” said the company’s producer Nicole Maria Nonis.

Lead animator Edmund Wong – who honed his skills working at the effects and animation studio ILM Singapore – said the gaming industry in Malaysia was pretty much established.

“So, when we hired local people from the gaming industry to be animators, they were actually quite capable, ” he said,

“They only needed a couple of pointers to transition from gaming to doing visual effects. They are actually pretty much on par with the rest of the world.”

Base Digital Production is part of Base Media, a visual effects and animation studio in Asia, headquartered in Beijing, China.

It expanded its operations beyond Beijing and opened an office in Los Angeles first and then two years ago in Kuala Lumpur.

Base Media has provided support in more than 50 Hollywood films including Star Wars: The Force Awakens, Transformers: Age Of Extinction, Captain America: Winter Soldier and Aquaman.

One of the first big projects the KL office handled was providing visual effects for the Michael Bay-directed 2019 action flick 6 Underground.

“On behalf of the ministry, I’m proud to announce that through our initiatives, over 100 Malaysian talents were given exposure to Hollywood blockbusters.

“This was made possible through the Film In Malaysia Incentive (Fimi), as it attracts international studios to approach Malaysia-based companies to produce stunning visual effects for their big titles, ” said Shakib.

He added that the government had been actively attracting investors since 2013 through Fimi, where the Malaysian government grants international production studios a 30% subsidy for all expenditure made in Malaysia, be it for filming or post-production activities.

“The total investment that we have attracted from overseas comes to about RM1.06bil. There is a future in this and we want to be part of it, ” said Shakib.

Among the international productions that have come to Malaysia to film in recent years are Crazy Rich Asians, The Singapore Grip, The Ghost Bride and Indian Summer.

Ahmad Idham said: “Fimi has attracted big titles to invest in Malaysian-based production companies and there are more to come.

“Malaysia is gaining recognition internationally as a preferred hub for visual effects and post-production activities.” 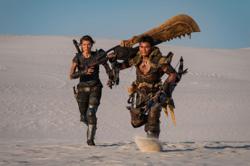