He said compounds were issued to 438 people while 40 others were remanded and four were granted police bail on Wednesday (Dec 2).

"Taking part in activities at entertainment outlets is the highest number of offence followed by not maintaining physical distancing and not wearing face masks.

"The compliance operation task force performed 61,784 checks nationwide, including at 3,600 supermarkets, 5,246 restaurants and 1,268 factories," he said in a statement on Thursday (Dec 3).

On Ops Benteng, 68 undocumented migrants and 10 "tekong" were detained on Wednesday, he added.

"A total of 296 roadblocks were conducted on Wednesday," he said.

"A total of 11,862 people are still undergoing mandatory quarantine at 78 hotels and 17 public training institutes nationwide.

"A total of 502 people were sent to hospital for treatment while 68,384 others have been discharged and allowed to go home," he said.

"On Wednesday, CIDB conducted checks on 35 sites, of which 33 complied with standard operating procedures (SOPs) while two others did not," he added.

"A total 14,260 areas have been sanitised during that period," he said.

He also announced that the Domestic Trade and Consumer Affairs Ministry conducted checks on 12 types of items at 692 premises nationwide on Wednesday.

"The supply of essential items is sufficient and easy to come by," he added. 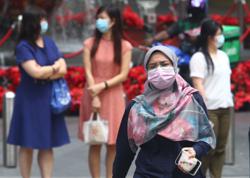