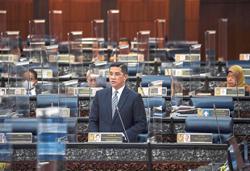 The Senior Minister (International Trade and Industry) also explained that due to Covid-19 travel restrictions, only RM66.6mil out of the allocated RM300mil for the Apec Summit 2020, was spent.

The RM66.6mil consisted of RM7mil for the Finance Ministry, RM4.1mil for the Tourism, Arts and Culture Ministry, and RM2mil for the Home Ministry, as well as a remaining of RM53.5mil spent for hosting the Apec 2020 Summit in various meetings.

"The savings of as much as RM233.4mil had since been returned to the Finance Ministry to support economic recovery efforts through several economic stimulus packages to assist Malaysians affected by the Covid-19 pandemic," said Azmin.

Azmin was speaking during his winding up speech at the committee stage in Parliament on Thursday (Dec 3).

Prior to Azmin's speech, Datuk Seri Ahmad Maslan (BN-Pontian) also asked for an explanation regarding the RM25mil allocation under Budget 2021 for the Apec 2020 Summit, questioning why is there a need for an allocation of that amount because the conference was held virtually due to Covid-19.

In response, Azmin said the RM25mil allocated for the Apec 2020 Summit in Budget 2021 was to cover the various costs that the conference incurred for 2021

According to Azmin, the figure consisted of RM5.02mil for emoluments and operational costs for 2021, and a remaining of RM16.2mil for the RM49.5mil branding contract that is set to end January next year.

The figure also consisted of RM63,494 for online website contracts and RM3.71mil for media purchase contracts.

"I would like to stress here that if the commitment for every contract isn't fulfilled, the government will be facing legal action by service providers which will incur severe financial burden."

Azmin also stressed that it was crucial to host the Apec 2020 summit, as it has been two years in a row that global economic leaders had failed to achieve a joint declaration.

"This year, Malaysia successfully gathered 21 global leaders to issue a joint statement. It is also important because Apec needed a new vision and direction for the next 20 years which has to be agreed by the 21 leaders.

"As a result, the Apec launched Putrajaya Vision 2040, which will be used in Apec summits up till 2040."

At the same time, Azmin took the opportunity to point out that RM635mil was approved by the former Pakatan Harapan administration for the Apec 2021 Summit in October 2018, as he showed off an approval letter by the finance ministry, which was helmed by Lim Guan Eng then.

"It was approved by Bagan (Lim) and the former government. There is also a RM30mil allocation for 2021.

This triggered a temporary outcry by Opposition MPs, as Azmin defended himself, saying that he was merely stating the facts.

"I was in the Cabinet and Alor Gajah MP (Datuk Seri Redzuan Yusof) as well. I have no problems and only in 2019 when we revised the allocations approved in 2018 and then lowered it to RM350mil."

He explained that when the former Pakatan administration decided to lower Apec 2020 Summit allocations to RM350mil, then the government decided to make payments in three different phases to contractors - RM20mil for 2019, RM300mil for 2020 and RM30mil for 2021.

Azmin's explanation appeared to not satisfy Lim, as the former finance minister interjected and asked whether it was wrong for the former Pakatan administration to conduct a stringent scrutiny to slash down Apec 2020 Summit allocation to RM350mil in 2019.

"The issue here is that why did it cost so much when the Apec 2020 Summit was conducted online?

"Are you ready for this matter to be investigated by the Public Accounts Committee (PAC) or the Audit Department to ensure that the RM25mil is spent transparently? Because it is hard to believe that a virtual meeting would cost so much.

MPs from both sides of the divide were then embroiled in a mini-shouting match, which abruptly ended after Azmin said he will provide further answers in a written reply to MPs.

Allocations for the International Trade and Industry under Budget 2021 were subsequently approved after a bloc vote that saw 110 voting for, 104 against and six absent MPs.