KUALA LUMPUR: As police investigate the television personality who was detained over allegations of rape, other women have come forward claiming to have been sexually assaulted by him.

As of Monday, seven police reports have been lodged against the 25-year-old and more are expected, said Bukit Aman CID director Comm Datuk Huzir Mohamed.

“So far, seven women aged between 22 and 26 have lodged reports against the suspect, ” he said at a press conference in Bukit Aman here yesterday.

The police, he added, have opened investigation papers for the case under Section 376 of the Penal Code for rape, Section 377C of the code for unnatural sex and Section 354 for molest.

The suspect was arrested on Nov 26 for allegedly raping a woman in Shah Alam and remanded until yesterday.

“We will be rearresting him to assist with the other investigations, ” Comm Huzir said.

All of the victims got to know the suspect via Instagram, he added.

“He would chat with the victims through direct messaging on the app before asking them out for meals to discuss various things, including business matters.

“Then he would come up with various excuses to take them home, ” he said.

A police task force has been formed to investigate cases connected to the suspect.

“We urge other victims to come forward as soon as possible, ” he added.

The suspect, a former reality TV contestant, was detained for allegedly raping a 23-year-old woman in Shah Alam.

He is alleged to have taken the victim to a restaurant in Batu 3, Shah Alam, in September last year and to his home in Seksyen 7, also in Shah Alam, to supposedly give her tips on how to cure her depression, before raping her.

The suspect is said to have warned the victim at 6.40am the next day to keep quiet over the assault.

The victim lodged a police report on the incident on Nov 25 (this year).

On another matter, Comm Huzir said three more suspects, including the main suspect aged 23, have been detained in connection with the murder of a former Mardi (Malaysian Agricultural Research and Development Institute) researcher who died fending off robbers at his home in Bangsar here on Sunday.

This brings the total suspects arrested to 13.

Comm Huzir said the three men were detained separately in Jalan Genting Klang and Air Panas in Kuala Lumpur and Semenyih between 3.30am and 5am yesterday.

“The main suspect admitted to slashing the victim during the robbery, ” he said.

Police are also looking for another man, T. Sugu, 27, to assist in the investigation. 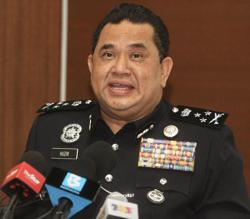