KUALA LUMPUR: The US government has congratulated Malaysia for its success in hosting the Asia-Pacific Economic Cooperation (Apec) Summit, which saw the adoption of Putrajaya Vision 2040 and the Kuala Lumpur Declaration, says the Prime Minister.

Tan Sri Muhyiddin Yassin said the message was conveyed to him by US Ambassador to Malaysia Kamala Shirin Lakhdhir, who paid him a courtesy call at his office in the Parliament building yesterday.

Both the Kuala Lumpur Declaration and Putrajaya Vision 2040, he added, would be a new aspiration for regional economic growth for the Apec community over the next 20 years.

“Through Her Excellency Madam Kamala, I have conveyed the Malaysian government’s appreciation as the host of Apec 2020 to President Donald Trump for his involvement in representing the United States at the Apec Summit, which took place virtually on Nov 20, ” Muhyiddin said in a post on Facebook yesterday.

Trump lost the US presidential race to Joe Biden, who will be inaugurated as the next US president on Jan 20.

Muhyiddin said the ambassador also shared with him the latest developments of the Covid-19 vaccines produced by US biotechnology and pharmaceutical companies, which are currently undergoing testing and approval process by

the country’s Food and Drug Administration.

Muhyiddin said he welcomed the development and hoped that access to the vaccines would be fair and equitable.

Discussions with Kamala also focused on matters related to enhancing bilateral cooperation, including in trade, investment, finance and education, as well as regional geopolitical issues and international security, he said.

“I ended the meeting by expressing hope that the long-standing relationship between Malaysia and the United States can be further strengthened in the future, ” he added. — Bernama 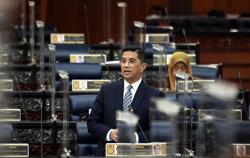