No entry for foreign workers into PKFZ unless Covid-19 negative

PETALING JAYA: The Port Klang Free Zone (PKFZ) has made it compulsory for all foreign workers within the port to undergo Covid-19 PCR testing.

Those who have tested negative are allowed entry and to resume work, while those waiting on test results are prohibited from the port, said PKFZ chairman Datuk Lawrence Low.

The PKFZ management imposed the strict standard operating procedure (SOP) in accordance to guidelines from the Port Klang Authority, Ministry of Health and other related agencies, he added.

“PKFZ would like to emphasise that all the Covid-19 cases reported in PKFZ originated from workers living in quarters outside and not within PKFZ.

“However, since they may have entered PKFZ during the course of their work, they were immediately identified through mandatory testing and hospitalised and are only allowed entry into PKFZ after they have fully recovered, ” he said in a press statement.

Low said that all positive cases were quickly reported to the Ministry of Health and PKFZ for immediate treatment at hospitals and follow-up action.

He added that active contact tracing and immediate isolation

of those suspected with Covid-19 were conducted.

Low also said that before operations could resume again, thorough cleaning and disinfection of the affected premises was carried out immediately after positive cases were reported.

He added that workers’ living quarters, which are all located outside the port were required to be cleaned and disinfected twice a day as per the MOH’s instructions.

Low said that as of Nov 24,55 workers including four locals employed at their client’s premises in PKFZ have tested positive for Covid-19.

He said that more than 40 of these workers were from two companies, which have since suspended their operations temporarily.

“All affected premises have carried out disinfection and deep cleansing while their workers were managed by the Ministry of Health and given the necessary treatment at hospitals, ” he said.

He added that foreign workers residing in areas where large number of positive cases have been reported were required to undergo 14-days of self quarantine under the supervision of their employers despite testing negative.

Low said that they were only permitted to enter PKFZ to resume work if a second test on the 13th day is negative.

He said that as a result of mandatory testing after Nov 10 they were able to identify positive cases early and with proper management, only six cases were reported since Nov 21.

He said there were no cases reported on Tuesday, with only two companies – Golden Horse Rubber and Maersk – making the decision to temporarily cease operations as a precautionary measure although both are expected to resume soon.

“Despite these difficult times and limitations, PKFZ is operating and functioning with minimal disruptions to our service and tenants with strict observance of health, safety and security SOP, ” he said. 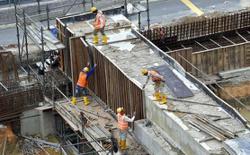