KUALA TERENGGANU (Bernama): Kemaman became the latest district to be hit by floods in Terengganu as the number of evacuees in the state continues to increase to 690 people from 184 families as at 8am on Wednesday (Nov 25) compared to 389 people (94 families) recorded the night before.

Currently, there are 23 temporary relief centres (PPS) operating statewide and Dungun recorded the highest number of PPS at seven locations which housed 131 people from 34 families, compared to only 69 people from17 families placed in four PPS previously.

Terengganu Disaster Management Committee Secretariat chief Lt Col (PA) Che Adam A Rahman said that in Setiu, two more PPS were opened bringing the total number of PPS in the district to six which accommodated 125 people from 40 families compared to 69 people from 17 families who were sheltered at four PPS on Tuesday (Nov 24) night.

"There has been a slight increase in the number of evacuees in Kuala Nerus at 206 people from 52 families compared to 156 people from 32 families previously and they are housed at four PPS.

"Similar development in Kuala Terengganu where the number of evacuees increased slightly to 101 people from 27 families compared to 53 people from18 families reported last night and they are currently placed at two PPS, ” he said on Wednesday.

In Marang, the number of those seeking shelter at three PPS has also increased to 90 people from 21 families compared to 33 people from seven families on Tuesday night.

"This latest data shows that all districts in Terengganu have been affected by floods except in Hulu Terengganu. However, the residents there are advised to be vigilant with the current weather changes, ” he said.

The other three rivers in Kemaman, Hulu Terengganu and Marang have also exceeded the alert level.

Meanwhile in Kelantan, the number of flood victims at the two relief centres in Kuala Krai increased to 14 people, involving three families on Wednesday morning, from only six people (two families) the day before.

Eight victims are being sheltered at a relief centre at Sekolah Kebangsaan Banggol Guchil, with the remaining six victims, including a baby girl, at the relief centre at Masjid Lama Keroh, Kuala Krai.

In Melaka, the number of flood victims at three evacuation centres remained at 199 people from 48 families as of 8am on Wednesday. 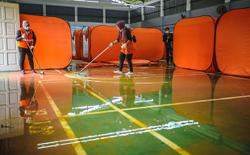