PUTRAJAYA: Graftbusters probing the Immigration “stamping facility” syndicate made another shocking discovery about a low-ranking Immigration officer found to own luxury cars – he has a criminal record and is believed to be a secret society member.According to police records, this officer had a rap sheet for committing auto theft and robbery, said sources with knowledge of the investigation.

“He is believed to be part of a syndicate that committed these crimes and is led by a foreign workers’ agent, who was also arrested.

“Investigators also believe the officer is involved in a secret society, ” said a source close to the Malaysian Anti-Corruption Commission (MACC).

“The question here is, how can someone with a criminal record be employed in the civil service?”

Investigators believe that after being employed as a civil servant he continued his criminal activities, including smuggling migrants.However, it is not clear how long he has been employed in the Immigration Department.

The Immigration officer, who is employed under grade KP19, earning between RM1,360 and RM4,052 monthly minus allowance, had earlier shocked MACC investigators who found that he owned a fleet of luxury cars.

Sources also revealed that one of the 12 foreign workers’ agents nabbed in the Ops Selat sting operation last week is a man wanted by the police.

It is believed that the suspect was involved in three cases involving car theft and conspiracy in syndicated crime.

“He is the agent who kept the four luxury cars owned by the Immigration officer, ” a source told The Star.

To date, 56 individuals – 34 immigration officers, 12 foreign workers’ agents and 10 civilians – have been arrested.

“Together with the Immigration Department and police, MACC will ensure that those involved, including the foreign workers’ agents, pay for their crime.”

The syndicate, whose services were in high demand since the movement control order began in March, is believed to have provided “flying passport” services with agents collecting passports belonging to foreign workers and illegal immigrants whose social visit passes had expired.

The passports would then be given the Immigration exit and entry stamps by the syndicate to allow permits to be extended, which is a violation of procedures as the owner of a travel document must be present during the Immigration process. 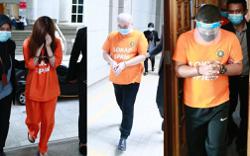