The coalition’s treasurer-general said that Barisan had previously announced its support for the Budget and that has not changed.

"If there are certain quarters that are not satisfied, at the end they have to see what the coalition has decided then that is easy for us to look forward.

"If not, everyone will have their own views, sentiments, and emotions.

"If we go back to what we have agreed, it will be easy for us to look forward to, including this Thursday (Nov 26)," he said, referring to the date when the Budget would be put to the vote in the Dewan Rakyat.

Hishammuddin said that during the Barisan meeting at the Umno headquarters on Monday (Nov 23), the coalition had discussed the current political landscape of the country.

This, he said, showed that Barisan still remained relevant where there was understanding, sincerity and honesty between its coalition members.

“This is a good sign because we know the political landscape out there has numerous possibilities but so long as we are together, we can have our differences in opinion, but we put the interest of the coalition first.

“The interest of the coalition is based on what is best for the people of various races. This is Barisan’s advantage, ” he said, adding that the time has come for them to show their leadership to not just one race but to all races.

Hishammuddin said this was the strength of the coalition since its founding.

He pointed out that political uncertainties were not just unique to Malaysia but also to other countries around the world.

“If we can show our sincerity and honesty of what we can do and prove it to the people, at the end of the day, the people will decide on our rise and fall.

“If we can prove that to the people, Barisan can come out of this situation today stronger, ” he said.

When asked if that meant leaving Perikatan Nasional, Hishammuddin said that this does need to be decided now.

“What is important is that the constituents and the people in the grassroots are who we must prioritise, ” he said, adding that a political party’s fate is decided on whether it can understand the aspirations of the grassroots.

"They are all aware of their responsibility. If what we uphold is good for the people, I believe we will continue it," he said after the meeting.

Dr Wee said many issues were discussed during the meeting at the Umno HQ including internal and intra-party issues as well as the support for Budget 2021.

"This is a normal meeting and in this situation, we will strengthen Barisan and at the same time do our best for the country," he said.

He added that Barisan remains relevant from the day the country gained independence till now.

Separately, MIC deputy president Datuk Seri M. Saravanan, who also attended the meeting, said that as they discussed the direction of the coalition, they had all agreed that a special plan must be set up to ensure that Barisan remains relevant.

“We have to listen to the sentiments of the grassroots and their stance. We will also follow the aspirations of the coalition, ” he said. 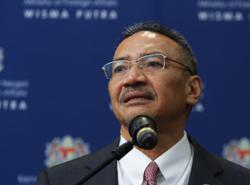