Man surrenders to police over alleged stabbing of his wife 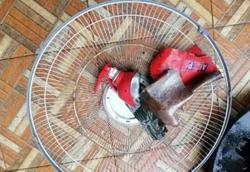 ALOR SETAR (Bernama): An unemployed man, believed to have stabbed his wife with a knife on Wednesday (Nov 18), surrendered himself at the Baling district police headquarters (IPD) at 10.30pm Friday (Nov 20) night.

Baling OCPD Supt Syed Basri Syed Ali said the 33-year-old suspect who fled the scene after the incident was taken to the Baling IPD by his father and handed over to the police.

"The suspect was remanded for seven days until Nov 27 to assist in investigations, ” he said Saturday.

In the 7am incident on Wednesday, a 36-year-old woman sustained injuries to her abdomen after she was believed to have been stabbed by her husband following an altercation at their house in Kampung Iboi, Kupang near Baling.

Supt Syed Basri said the victim, who was stabbed twice, is currently being treated at the Sultan Abdul Halim Hospital in Sungai Petani and is in stable condition.

"The case is being investigated under Section 324 of the Penal Code," he said. - Bernama