According to Azhar, this was because Standing Orders 4 did not provide him powers to review decisions made by Deputy Speaker Datuk Seri Azalina Othman Said.

"That is why I rejected your motion. It was a technical issue, not merit," he said in response to Rayer, who raised the issue before debates on Budget 2021 resumed in Parliament on Tuesday (Nov 17).

Prior to Azhar's remarks, Rayer also said Tiong's remarks against Tan Sri Dr Noor Hisham Abdullah went against Standing Orders 36(12) as the Bintulu MP had falsely claimed that the Health director-general did not visit Sabah when Covid-19 cases were at an all-time high.

Azhar said Tiong's remarks had not gone against Standing Order 36(12) as his remarks about Dr Noor Hisham's presence in Sabah was a debate about facts.

"That is an argument on facts and I cannot solve it here."

However, Azhar asked Rayer to formally write to him so he could demand an explanation from Tiong for his remarks.

Rayer also asked Azhar to retract a five-day suspension on Lim Lip Eng (PH-Kepong) to attend Parliament, as Tiong had formally apologised over his "takut mati" remarks outside of Parliament.

In response, Azhar said Lim was always welcome to meet him over the matter.

Lim, told The Star shortly after that he was willing to meet Azhar over the matter.

"To meet him on issues affecting the people, especially in times of Covid-19 pandemic? Yes!" he said.

Last week, Parliament descended into a shouting match after Tiong asked if Dr Noor Hisham's absence in Sabah was due to his fear of Covid-19.

It saw the ejection of Rayer from the Parliament by Azalina on Nov 11 after the Jelutong MP refused to heed her calls to sit down.

The next day on Nov 12, Lim was ejected by Azhar and was slapped with a five-day suspension after he claimed the ruling by Azalina on Rayer as "stupid".

Tiong eventually apologised in a press statement on Sunday (Nov 15). 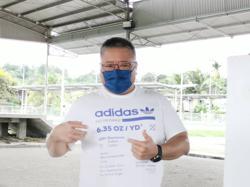