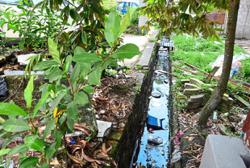 Of the total, he said, 1,733 cases were recorded in the Melaka Tengah district, Jasin (450 cases) and Alor Gajah (379 cases), while 15 hotspot localities were also identified this year.

"Various efforts are being carried out to prevent the spread of dengue fever such as fogging, communal works, awareness campaigns and by destroying Aedes mosquito breeding grounds but the cases keep increasing,” he said on Sunday (Nov 15).

Elaborating, he said the Melaka Health Department has destroyed mosquito breeding grounds in 125,819 premises around the state, with 7,123 identified as positive breeding locations for Aedes mosquito larvae.

Besides that, thermal fogging were conducted at the case locations and high-risk areas from Jan 1 until Nov 2, this besides educational activities related to dengue fever.

"Dengue fever is mostly linked to cleanliness and I urge society to ensure their homes are cleaned frequently and not become Aedes mosquito breeding grounds,” Rahmad said.- Bernama