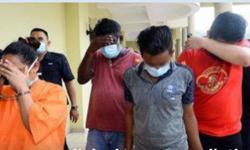 GOMBAK: The premises used to house the chemicals responsible for the latest round of water disruption in the Klang Valley have only been in use for two weeks, say the police.

“The place was only rented out two weeks ago.

"The discharge drain used was found inside and is roughly 300m away from the treatment plant.

Earlier in the day, Selangor CID chief Senior Asst Comm Datuk Fadzil Ahmat had, in a statement, said four suspects had been arrested would be remanded.

“Acting on the latest reports of water pollution, the police conducted arrests from midnight to early Wednesday morning. The arrests were made in Gombak, Damansara and Kelana Jaya.

"Four individuals, aged between 33 and 43, were arrested.

"Investigations showed the female suspect was the registered name that had rented the premises at No. 32 Jalan Velox 2, Rawang. A 33-year-old Bangladeshi man and a local man had stockpiled chemical materials at the rented premises.

"It is believed that chemicals were thrown into a sewage hole which flowed into the polluted area," SAC Fadzil said earlier.

The suspects have been remanded until Nov 17.

Prior to this on Tuesday, the Selangor Water Management Authority said the source of the pollution might be solvents and that this had caused operations at the water treatment plants in Rantau Panjang and Sungai Selangor’s Phase 1,2 and 3 to be stopped from 12.45pm. 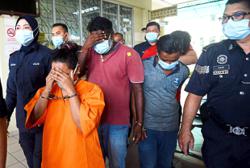