PONTIAN: Three male suspects broke into a Chinese temple at Tanjung Air Hitam near Kayu Ara Pasong here, before running away with RM5,000 of public donation.

“Based on CCTV footages recovered at the scene, three masked suspects used a lorry to smash a wall before entering the premise.

“They destroyed the wall and use the makeshift hole to exit the temple, ” he said when contacted here on Saturday.

Supt Mustafa Bakri added the wall was completely destroyed with rubble all over the temple.

“About RM5,000 was inside the donation box, and the case is investigated under Section 457 of the Penal Code for burglary, which carries a jail term of 14 years upon conviction, ” he added. 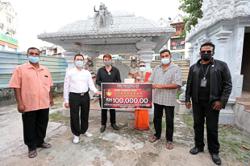