PETALING JAYA: Using the Internet and technology, gambling syndicates offering 4D draws are estimated to have made more than RM250mil when the first phase of the movement control order (MCO) was introduced in mid-March.

They used social media to advertise their “services” and mobile applications, which could be downloaded from the Internet.

“Using modern technology, they linked up with online payment getaways and accepted credit card payments for bets, ” a source said, adding that these operators were legitimate outfits registered with authorities in a neighbouring country.

There are at least six of such 4D online betting platforms operated by Malaysians, offering identical games used by local NFOs such as Magnum, Sports Toto and Da Ma Cai.These companies, said the source, even have local representatives and customer service lines to deal with gamblers’ inquiries.

The source said, unlike Singapore, which has the Remote Gambling Act to deal with such operators, Malaysia has no law to regulate such operations.

“Therefore, it makes law enforcement against these operators a much more challenging task, ” said the source.

“Even if the Malaysian Communications and Multimedia Commission blocked the Internet gateways for these sites, there are many ways to bypass them, making it tedious and difficult to permanently prevent such gambling operations from being accessed by local gamblers, ” said the source.

“But it would be a long and tedious process for the government to put the new law together.

“To get a head start, the government must formulate a framework and place its processes now should the implementation of such legislation is needed.” 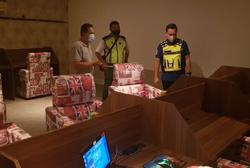