PETALING JAYA: The day would have been any other day at work for Datuk Seri Dr Wee Ka Siong, except that two Perdana Fellows presented him with a special birthday present.

The Transport Minister said he was humbled by the gesture as well as by other well-wishers who remembered his 52nd birthday.

“I received a special present from Farihin and Farizuan, two Perdana Fellows who are attached to the ministry. Thank you to everyone who wished me today, ” he said in an Instagram post on Tuesday (Oct 20).

While expressing his thanks to the fellows for their good service, Dr Wee also congratulated one of them as they have been offered a position.

“Congratulations to Farizuan who has just been offered the position of an officer at the Majlis Amanah Rakyat (Mara) Jempol district office.

“As for Farihin, she is actively seeking to become a psychology research officer at several research institutions. I wish them all the best, ” he said. 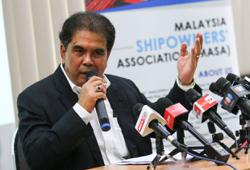