JOHOR BARU: A 5kg baby crocodile on the loose in Taman Pulai Utama, Skudai here, has been caught by the Fire and Rescue Department.

Skudai Fire and Rescue Department operations commander Inggai Anak Bakau said a resident of Jalan Pulai Utama 67, Taman Pulai Utama made an emergency call at 7.22am on Sunday (Oct 11) after noticing the reptile in front of his neighbour’s house.

He said that nine firemen were sent to the scene and found the reptile still in the same position as reported.

“It did not move much and we managed to capture it within 10 minutes with the help of some passers-by. The baby crocodile measured about one metre long and has been handed over to the Wildlife and National Parks Department, ” he said. 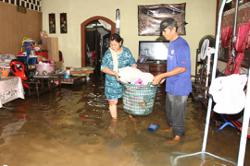