KUALA LUMPUR: It is up to the landowner to resolve the issue of relocating the squatters at Kampung Langgak Bukit in Setapak, says Kuala Lumpur City Hall (DBKL).

In a statement on Friday (Sept 25), DBKL said it was only responsible for relocation and preparing settlements for residents on government-owned land.

"As the legitimate landowner, it is the responsibility of the developer - Sun Trex Development Sdn Bhd - to find alternative settlements for the affected residents. DBKL is only helping to relocate the residents to people’s housing project (PPR) and public housing (PA) out of concern, subject to existing conditions," it said.

The statement said that 10 families had been offered PPR and PA units, while the rest were not qualified as they did not meet the necessary conditions due to their income level or because they were unmarried or already owned a home within 35km of Kuala Lumpur.

On Sept 22, the squatters were told to vacate the 0.4ha plot of land to make way for a clearing exercise by a developer to kickstart a project to build nine units of shoplots.

A man claiming to represent the developer said the squatters were already a given three-month extension twice since November 2019.

Batu MP P. Prabakaran, however, urged the developer to give another extension as some squatters were still looking for a place to move to while some were appealing with DBKL. 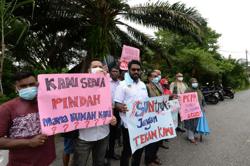