Hazem first joined 1MDB as a chief operating officer (COO) with a monthly pay of RM65,000 in 2012. He received a hefty bump when he replaced Datuk Shahrol Azral Ibrahim Halmi as the CEO in 2013, earning RM93,000.

The court had heard that Shahrol’s last drawn salary as the CEO was RM99,000 and that he had received an 18-month bonus once.

In contrast, Hazem said he received bonuses twice during his tenure as CEO.

To another question, the witness said he did not receive a sen from the funds raised through loans or bonds from 1MDB.

This was when he started work at Arab Malaysian Merchant Bank (AMMB) Bhd as a senior executive in 1996 after graduating from Case Western Reserve University in the United States.

Shafee then quipped that nobody would forget one’s first salary.

“I earned RM670 as a deputy public prosecutor,” he added.

Hazem then worked at Dana Modal Nasional Bhd as a senior executive between 1998 and 1999 with a monthly salary of RM2,500.

In 2000, he became an investment analyst with Credit Lyonnais Securities Asia Kuala Lumpur with a starting pay of RM7,500. His last drawn salary there was about RM12,000.

In 2008, he joined Sime Darby Bhd as group head of value management with an entry salary of RM15,000.

Hazem later moved on to Sime Darby’s motor division as head of strategic initiative with a RM20,000-odd pay.

In the same year, Hazem became the managing director of Sime Darby Auto Conexxion with his last drawn salary being RM38,000. This was his last position before joining 1MDB.

Prior to joining 1MDB, the witness said he was interviewed by Shahrol over lunch at Eastin Hotel, Petaling Jaya, in 2012.

Shafee: Were you headhunted by Shahrol?

Hazem: He did not headhunt me. It was my former boss Datuk Nor Badli Mohd Alias in AMMB and he was a friend of Tan Sri Ismee Ismail, who was a board member in 1MDB.

Hazem said Nor Badli told him that 1MDB was looking for a COO and he (Hazem) could send in his resume if he was interested. 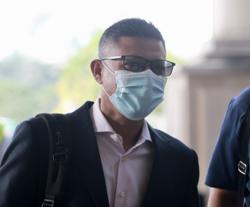