Holding a lonely fort for rattan-weaving

Master of his craft: Ah Sang working on a piece of rattan furniture in his shed in Parit Bakar, Muar. — THOMAS YONG/The Star

MUAR: Clad in a singlet and a pair of knee-length shorts, rattan weaver Yam Ban Sang sits barefooted, masterfully bending pieces of rattan into the shape he wants.

The 70-year-old is one of two remaining weavers at a rattan furniture manufacturing site in Parit Bakar here.

Yam, who prefers to go by the name Ah Sang, stumbled upon the craft 50 years ago while working in the construction industry in Kuala Lumpur. “Back then, my friends and I would take on any work we could for a living.

“As a young man, I was also curious and hungry to learn just about anything.

“So, when I met a skilled rattan weaver, I decided to call him my sifu and learnt from him,” he said in an interview. Over the years, Ah Sang had gone in and out of jobs – from being a lorry driver to a construction foreman – but his perseverance in perfecting his rattan weaving skills never wavered. Initially, there were several people learning from his teacher but most of them dropped out over time after finding greener pastures.

“My sifu was a very strict man. If I produced a rattan product that was not up to his standard, he would ask me to take the whole thing apart and start all over.

“What he taught was the traditional way of weaving rattan.

“Until today, I still carry on his techniques based on what I learnt from seeing him work,” Ah Sang said.Just by touching a piece of rattan, Ah Sang knows the technique that is needed to shape it.

With his days of slogging to make a living behind him, he now enjoys a more serene lifestyle, working in a shed at the site tucked in an oil palm estate. Over the years, many youths interested in learning the craft came and went. No one really stuck to it because of its labour-intensive nature.“It is not easy to master the skill as we have to get our hands dirty. Once I had a student who insisted on doing things his way by cutting corners.

“So, I told him not to touch anything but I still paid his allowance,” said the sprightly man.

With nobody else to transfer his skills to, Ah Sang has to depend on foreign labourers for the past few years.

“I still do most of the heavy lifting work to shape the furniture frames from rattan poles.

“The labourers help me with things such as pattern weaving according to the mould, nailing the furniture into place and smoothing out the edges.

“I just want to keep doing what I do for as long as I can still do it,” he said. 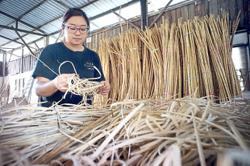 Four men flogged for having sex with minors