SHAH ALAM (Bernama): The Sultan of Selangor Sultan Sharafuddin Idris Shah has agreed to buy the Golden Boot belonging to former national footballer Khalid Jamlus at a price agreed by both parties.

The Selangor Ruler also agreed that the Golden Boot trophy won by Khalid in 2002 be placed at the Selangor Football Gallery located in the palace grounds of Istana Alam Shah.

Khalid represented the Selangor team in the Premier League in the 2005-2006 season.

Khalid, who is also a former Perak player, won the Golden Boot award after scoring 17 goals while helping Perak emerge the Premier League 1 champions in the 2002 season.

Earlier, it was reported that the former national striker wanted to sell his Golden Boot for RM10,500 through a live bid on his Facebook page, after being unemployed for three years and when his contract as assistant coach for the Royal Malaysia Police was not extended. – Bernama 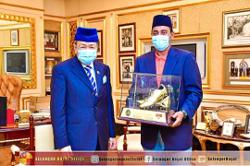 Khalid gets back on his feet with latest business venture