KUALA LUMPUR: Women, Family and Community Development Minister Datuk Seri Rina Harun, who is facing bankruptcy, did not attend a judgment debtor summons hearing filed against her at the High Court here.

Her lawyer Husain Mohd Razak (pic) told the press that his client could not attend the proceedings before High Court deputy registrar Farah Shuhada Ramli because of personal matters.

The court then fixed Oct 22 for another case management in the judgment debtor summons hearing.

"God willing, my client will attend it. We can settle this issue as soon as possible. Unfortunately, today she has an emergency that she could not avoid," Husain said on Wednesday (Sept 9).

Lawyer Mark Ho, who is representing French production company Sarl Novovision, said Rina had proposed settlement terms with his client but could not disclose the terms.

"I am sorry but I am not at liberty to reveal anything about it pending court proceedings.

"However, today the minister has handed cheques as an instalment payment and on that basis, the court granted a new date for the judgement debtor summons," he said.

On Tuesday (Sept 8), The Star reported that Rina – through her now-defunct companies Eurofine (M) Sdn Bhd, Fine Mobile Network Sdn Bhd and Fine TV Network Sdn Bhd – had purchased several comedy shows and documentaries worth millions of ringgit from the Paris-based production company between 2011 and 2013.

In April last year, a consent judgement was entered between both parties after Rina, who is also Parti Pribumi Bersatu Malaysia's women's wing chief, failed to settle the disputed amount. 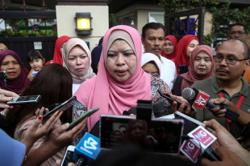