“It is untrue. I’m with Barisan Nasional/Perikatan Nasional,” he said briefly Monday (Sept 7).

Jamawi, however, stopped short at saying which party under Barisan and Perikatan he would join.

Sabah Umno has not made a decision on the position of all its former assemblymen who switched allegiance following the fall of the Barisan-led state government in GE14.

Zawawi was also the last of the 33 assemblymen who turned up at the house of the former chief minister Tan Sri Musa Aman, who made a bid to topple the Warisan Plus state government.

However, the move failed after the Governor decided to dissolve the state assembly instead. 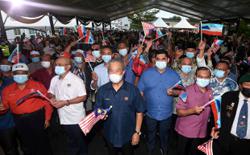