GEORGE TOWN: Old girls from Convent Light Street (CLS) are rejoicing over the news that their alma mater will become a private educational institution.

Penang Tourist Guides Association president Chin Poh Chin, who was in the class of 1977, said she was proud that her school was going private.

“CLS was the office of Penang founder Captain Francis Light. A well was also specially dug for his use there.

“Both of them worked briefly in the Government House, which is part of the CLS premises, ” she said in a phone interview yesterday.

Chin hailed the move by Infant Jesus Sisters Malaysia, the owner of CLS, to turn the premises into an international school.

“Since it is within the George Town heritage enclave, developers will not have interest in it as there will be many restrictions.

“Turning the heritage building into an educational site which follows the British syllabus is a good move as CLS was one of the best English schools in Malaysia with strict discipline by the Sisters.

“As Penang was formerly under the British, we will be able to attract many parents from neighbouring countries, especially Thailand, Indonesia, Myanmar and Vietnam, to send their children here to study the British syllabus, ” said Chin, who is in her early 60s.

“CLS is a beautiful, charming and elegant school with sprawling grounds housing a chapel, a kindergarten, a library, several halls, a domestic building for home science, two tuck shops and many classrooms.

“Every time we have a chance to go back there, we will reminisce about our happy and carefree times as students there with the dedicated French, Irish and local nuns imparting morals and values to us.

“We were in awe of the sisters and teachers and held them in high regard and respect.

“The school is so rich in history and no part of it should be torn down, ” said the retiree.

Another former student, 55-year-old Pauline See, said that after reading about the school’s plan to turn into a private educational institution, she called up a few old schoolmates to hear their take on it.

“I have been asking my friends if it is ‘yay’ or ‘nay’ for them. Some agreed and some don’t.

“To me, this might be a good opportunity for students if they keep the fees affordable, ” she said.

See, who works part-time at a private firm, said there were many private schools in Penang.

“I understand that some parents want their children to attend English medium schools.

“I would want to send my grandchildren to private schools if they are affordable, ” she added.

State education committee chairman Dr P. Ramasamy said it was sad that the owners would no longer be part of the national school system as CLS was a symbolic structure in Penang.

“The school has been an integral part of education in the state. But we understand the rising cost of maintaining the heritage premises and it’s purely their right to make such a decision, ” he said.

On earlier reports that the state might find alternative land to relocate the school, Ramasamy said no decision had been made on the issue.

CLS, which was started in 1852, is the oldest girls’ school in South-East Asia. It moved to its current building in 1859. 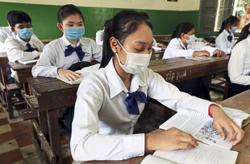