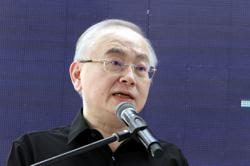 JOHOR BARU: The spotlight is on former Johor mentri besar Datuk Osman Sapian (pic) in the coming days to see whether the Kempas assemblyman will force a hung state assembly.

The 69-year-old politician, who courted many controversies during his one-year tenure as mentri besar, is facing the possibility of having his Parti Pribumi Bersatu Malaysia membership terminated after a viral video showed him campaigning on behalf of an Independent candidate during the Slim by election.

Pulai Bersatu division will be making an official report against Osman to the party’s disciplinary board on Thursday.

The Johor state assembly meeting is taking place on Sept 10 and Sept 13 in Kota Iskandar.

State Speaker Suhaizan Kaiat said the present state government would not have a simple majority if Bersatu takes action against Osman or if he decides to quit and become an independent.

“The present government has 29 seats compared to Pakatan Harapan’s 27 seats.

“If Osman becomes an Independent, then the present government will have 28 seats, while Pakatan will still have 27 seats unless Osman decides to support the Opposition,” he said when contacted yesterday.

If such a matter happens, then it would force the state assembly to be hung, putting the state government in a difficult position when trying to approve a motion.

“If there is a hung assembly, then the Speaker will have the deciding vote on whether the motion will be passed or not,” he said.

When asked about the motions that would be tabled during the state assembly sitting, Suhaizan, who is Parti Amanah Negara national organising secretary, said he would know about them during a meeting on Thursday.

Under Undang Undang Tubuh Kerajaan Negeri Johor 1895, the state government can still carry out its duty as long as the mentri besar has majority support of the 56 elected representatives.

If the Opposition believes it has sufficient support, it can table a motion of no confidence against the mentri besar.

Sultan Ibrahim pointed out that he had taken an oath to protect and defend the rakyat and the state at all times.

“If there is power grabbing happening among the elected representatives, then I will immediately dissolve the Johor state assembly,” he had warned.

Meanwhile, state Pakatan chief Aminolhuda Hassan said if Osman decides to return to Pakatan, then it will be a difficult situation in the state assembly.

“There will be an equal number of seats between the state government and Pakatan in the state assembly. It is better to resolve this political predicament by returning the people’s mandate,” he said yesterday.

Aminolhuda, who is also the state’s Amanah chairman, confirmed that Osman met a Pakatan leader from Amanah.

He declined to elaborate but said the meeting took place recently.

Johor PKR deputy chief Jimmy Puah said it was unlikely for Bersatu to sack Osman without taking into consideration the implications of such a move.

“If Osman decides to leave Bersatu and joins Tun Dr Mahathir Mohamad’s Parti Pejuang Tanahair, then we at Pakatan will welcome him.

“Despite Pejuang not being part of Pakatan, we have an alliance with them under the Opposition bloc,” he said.

Puah said the pressure would surely be on the state government as it would lose its simple majority.