KUALA LUMPUR (Bernama): -- A heavier penalty for driving under the influence (DUI) of alcohol and permission for online court proceedings are among two significant matters that were passed at the Second Meeting of the Third Term of the 14th Parliament sitting on Thursday (Aug 27).

Apart from the four bills, the 25-day Parliament session also saw six more bills passed and they included the Supplementary Supply Bill (2019) 2020) and the National Security Council (NSC) (Amendment) Bill 2020 which allows the Yang di-Pertuan Agong to declare an area as a security area.

The first Parliament session under the Perikatan Nasional (PN) government led by Prime Minister Tan Sri Muhyiddin Yassin has indirectly reflected the strong support for the Perikatan bloc with two motions passed in their favour.

The bloc voting was for the Supply (Reallocation of Appropriated Expenditure) Bill 2020) and the motion for the previous Dewan Rakyat Speaker Tan Sri Mohamad Ariff Md Yusof to vacate his position, which was proposed by Muhyiddin.

Apart from passing the bills, this Parliament session also saw two bills which were supposed to be tabled for the second time, withdrawn.

They were the Constitution (Amendment) related to the appointment of the Prime Minister and the Independent Police Complaints and Misconduct Commission (IPCMC) Bill 2019.

The Independent Police Conduct Commission (IPCC) Bill 2020, which was scheduled to be tabled for the second reading, was postponed to the next sitting.

It also made history with the appointment of Pengerang MP Datuk Seri Azalina Othman Said as the first woman Deputy Dewan Rakyat Speaker.

Among the interesting issues raised by members of the house during the last week of sitting were on Plantation Industries and Commodities Minister Datuk Dr Mohd Khairuddin Aman Razali, who allegedly violated the mandatory quarantine order after returning from Turkey, apart from the issue on 101 projects awarded through direct negotiations under the previous Pakatan Harapan government.

With the session held during the recovery movement control order, certain standard operating procedures (SOPs) were also activated in the Dewan Rakyat to curb the spread of Covid-19, including wearing of face mask and physical distancing. Transparent barriers were also installed in between MPs’ seats to reduce risk of Covid-19 infection.

According to the Parliament official website, the Dewan Rakyat is scheduled to sit again on Nov 2. - Bernama 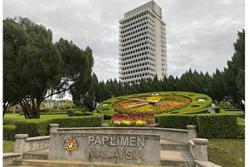