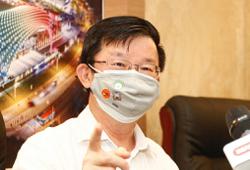 PETALING JAYA: Plantation Industries and Commodities Minister Datuk Dr Mohd Khairuddin Aman Razali has apologised for violating the 14-day quarantine rule and will be returning his salary as a minister from May to August to show his remorse.

Khairuddin - who recently came under fire for skipping quarantine after returning from Turkey in July - said on Saturday (Aug 22) that the forfeited salary will be given to the national Covid-19 fund under the Health Ministry.

“Referring to the Health Ministry’s press statement on the issue of the recovery movement control order (MCO) standard operating procedures (SOPs) today, I apologise to all Malaysians for the mistake that has occurred.

“As a Minister, I have a responsibility to follow all the regulations and SOPs throughout the recovery MCO.

“To show that sense of responsibility, I will be returning all of my salary as a minister from May until August 2020 as a contribution to the national Covid-19 fund under the Health Ministry.

“My salary for March and April 2020 were also contributed towards the fund, as per the Cabinet’s previous decision, ” he said in a statement on Saturday.

In March, the Cabinet had decided that all of its members’ salaries will be deducted for the next two months and contributed to the Covid-19 fund.

Khairuddin also vowed to continue working hard and double all of his efforts and energy into carrying out his duties as a minister.

“This is in order to ensure that all of the rakyat involved in the plantation industries and commodities, especially over a million B40 smallholders, will always receive benefits and have their welfare taken care of, ” he said.

Earlier Saturday (Aug 22), the Health Ministry said it slapped Mohd Khairuddin with a RM1,000 compound on Aug 7 for failing to adhere to the regulations under Act 342.

The Ministry clarified that Mohd Khairuddin had already settled the compound and also confirmed that he had taken three nasopharyngeal swab tests, all of which were negative.

On Tuesday (Aug 18), Seputeh MP Teresa Kok claimed in the Dewan Rakyat that Mohd Khairuddin had visited Turkey in an unofficial visit until July 7, but did not undergo the 14-day quarantine after returning to the country.

On Thursday (Aug 20), she claimed Mohd Khairuddin had been accompanied on his trip by family and officials and pictures of him attending various functions, including with other officials and ministers, have emerged on social media.

On social media, Malaysians too have been outraged at the perceived double standards being accorded to the minister, questioning whether there were different sets of laws for ministers and ordinary citizens.

Recently, a 72-year-old female senior citizen was fined RM8,000 and sentenced to a day in jail after violating her home quarantine order in Ipoh, Perak, while in Penang, a 42-year-old technician was fined RM2,500 for the same offence.

Past comes back to haunt Khairuddin for not heeding quarantine rule

M’sians angry at minister for not observing quarantine