"Demand for MyFreeview is very high and the government is looking at increasing to a million decoders so that we can provide the free service to the rakyat, especially in the rural areas," he said when answering a question raised by Dr Nik Muhammad Zawawi Salleh (PAS- Pasir Puteh) in Dewan Rakyat on Wednesday (Aug 12).

"MyFreeview recently added a new channel called Awesome TV geared towards the youths as it provides informative and entertainment programmes," he added.

He noted the disruption of MyFreeview broadcast was very minimal with Service Level Availability (SLA) currently at 99.96% as of January this year.

However, he acknowledged that broadcast signal for MyFreeview would be affected in areas where there are no broadband services.

Asked by Dr Nik Muhammad on the status development of the 5G telecommunications spectrum, Zahidi said the ministry has yet to award the contracts to companies for the purpose as it is focused on MyFreeview at the moment.

The 5G services, touted to be 20 times faster than current 4G mobile connections, is earmarked for development under a RM22bil National Fiberisation and Connectivity Plan.

In June, the ministry said it was cancelling its instructions to the Malaysian Communications and Multimedia Commission (MCMC) to allocate the 5G spectrum to five companies.

The revocation order came after controversy arose over the award process as it was said to have been done without an open tender as previously assured. 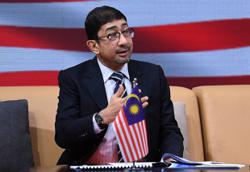 Veveonah shares photos of her with PM, Khairy on social media